Joseph C. Connolly was born in Limerick, Ireland and received his training in the Dublin office of James Joseph McCarthy (1817-81).  McCarthy specialized in work for the Roman Catholic Church and was one of the most celebrated architects in 19th-century Ireland.  Connolly advanced to become McCarthy’s chief assistant in the late 1860s. He subsequently made a tour of Europe studying church architecture, and in 1871 went into practice for himself in Dublin, although no records survive of any commissions.

In August of 1873 he moved to Toronto, Ontario and over the next 25 years designed or remodeled nearly forty Roman Catholic churches and chapels in Ontario; including The Church of Our Lady in Guelph, St. Peter’s Cathedral of London, St. Paul’s & St. Mary’s in Toronto, the Roman Catholic Cathedral in Sault-Sainte-Marie (Michigan) and James St. Baptist in Hamilton. His Irish background made him the ideal person to design St. Patrick’s Church for the Irish Catholic community. Joseph Connolly died in Toronto in 1904 at the age of 65.

St. Patrick’s Church is the only Joseph C. Connolly church in Southern Ontario where the original architectural drawings are still in existence. 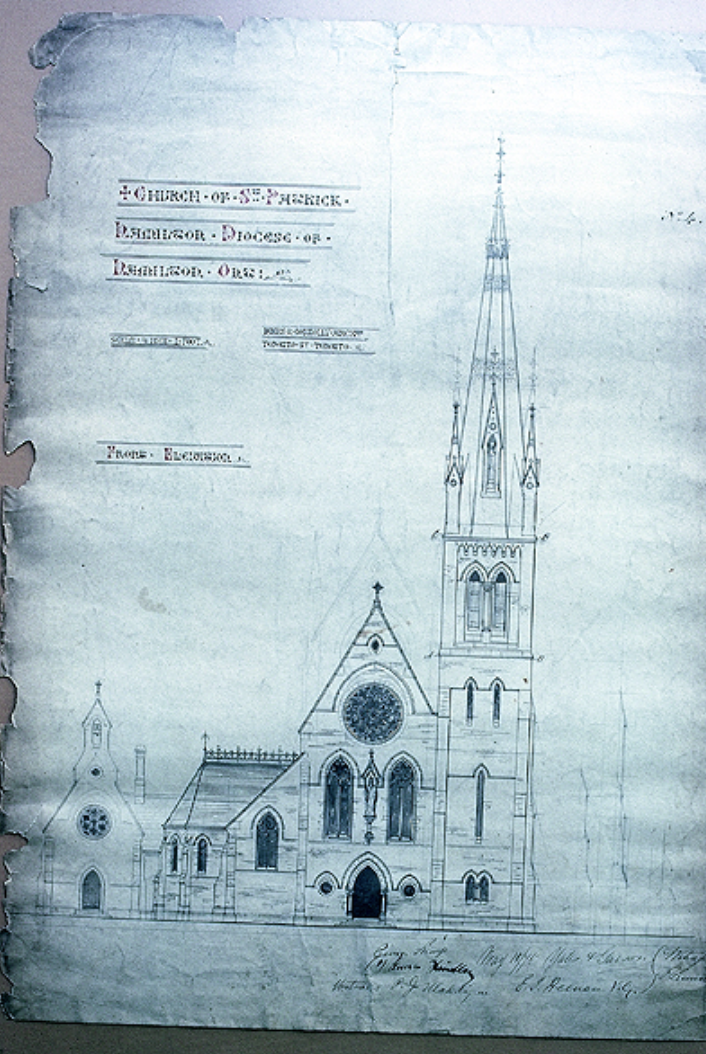 Hamilton experiences the largest population growth it had ever seen; 30% of the population living in Hamilton were of Irish descent and 9O% of the Irish community was Catholic. As the community to be served by this glorious church were Irish it was fitting that St. Patrick who served Ireland faithfully would be the patron.
Irish born Right Reverend P. F. Crinnon, second Bishop of the Diocese of Hamilton, purchased the swampy land for $10,000 and commissioned renowned Irish architect Joseph C. Connolly to design the church. This was a sizeable amount of money for the time considering the daily wage for 10 hours of unskilled labour was a mere .75 cents and illustrates the love and dedication the founding parishioners had for the Church.

In the spring of this year, building operations began on the new church. Workers had to dig down eight feet through muck and mud to lay the foundation. The corner stone was laid by Rt. Rev. P.F. Crinnon on June 27th, 1876.
A pipe organ, possibly made by Louis Mitchell, was installed in the choir loft to replace the original reed organ.

The church was dedicated on July Pt by Rt. Rev. George Conroy, Apostolic Delegate to Canada, assisted by Archbishop Lynch, Bishop Walsh of London and Bishop Crinnon. At this time, there were 500 families in the parish.
The christening of her peal of bells in the tower takes place on May 6th by Bishop Carbery. The 3 bells are christened after the Irish saints “St. Patrick”, “St. Brigid” and “St. Columba” and were cast by Henry McShane & Co. of Baltimore, MD.

The Presbytery was built and furnished around this time under the pastorate of The Very Rev. J. H. Coty.
The current Stations of the Cross are installed (sculpted by Angers of Paris). There are 14 Stations carved into three-. dimensional figures that depict the suffering and crucifixion of Jesus Christ. When these stations were installed, they were originally in full colour but they have since been painted over and are currently monochromatic with the exception of Jesus and other prominent figures in the portrayal. Early photos of the church show that the original stations were one dimensional portrait style paintings in wooden frames marked by a cross. Two of these Stations needed to be repaired after the tractor-trailer accident in 1982. For further reference, St. Patrick’s has produced a book called “Stations of the Cross” with colour pictures.

St. Patrick’s celebrates it Golden Jubilee (50 years) on July 3. On this date, Rev. Dean Cassidy announced that St Patrick’s would become the new cathedral and St. Mary’s would be designated pro-cathedral.
Around this time the old Presbytery which faced Main Street was torn down and the current rectory was built.

A fire destroys part of the slate roof, the choir loft and some pews in the north-west corner of the church on the 17th of May, all of which is repaired to the tune of $200,000. Other improvements were made such as the carpet being installed and the ceilings were repainted with newer mote colourful depictions of religious symbols by artisans from Toronto.
On Sept 20th, a runaway tractor-trailer carrying iron slabs crashes through the west wall of the church resulting in the death of a tourist visiting from Japan, and nearly $500,000 in repair costs.

At significant expense, the original slate roof was replaced due to deterioration caused by age and urban pollution. Commemorative tiles of the original 1877 roof are available for sale for those wanting a piece of local history.
St. Patrick’s officially becomes part of the World Wide Web with the URL http://www.stpatrickshamilton.org

When the Missionary Oblates of Mary Immaculate moved into the core of the City of Hamilton, St. Patrick parish neighbourhood, a fence surrounded the church grounds intended as a means of protection from the harsh realities of crime and vandalism in the impoverished area. Fr. Anthony O’Dell, OMI, and Fr. Jarek Pachocki, OMI, the new Co-pastors of St. Patrick Church, felt the fence was a barrier which gave the message that the Church wanted to keep people out instead of inviting them in. The fence very shortly after their arrival, came down which indicated that all are welcomed here. In the fall of 2012, many people started coming to the office front door asking for money. When asked why they needed money, many said it was because they were hungry. Instead of giving them money, the office staff began making a couple of loaves of sandwiches daily and handing them out at the office door along with a coffee. This was the unofficial beginning of De Mazenod Door Outreach.
The statue of Jesus, wrapped against the cold and sleeping on a bench, his pierced feet the only indication of his identity, had difficulty finding a home when Timothy P. Schmalz, Sculptor, was looking for support to have it installed in Toronto and New York City. The work eventually found a home on the grounds of Regis College, Toronto, where enthusiasm for it grew. It was seen by a Hamilton resident who made an offer to the Diocese of Hamilton to have this sculpture brought to Hamilton. At the recommendation of Bishop Douglas Crosby, St. Patrick Parish was the recipient of this wonderful work of art, which was installed in October 2015 at the corner of King Street East and Victoria Avenue South, one of the busiest intersections in downtown Hamilton. A local landscape architect, Allan Bowler, donated his time and expertise to help plan the site where the Homeless Jesus statue is located. We are extremely grateful to both donors. This site gives everyone an opportunity to pause in the busyness of our lives and to appreciate the closeness of God in our reality.

At the same time the Homeless Jesus statue was being made, Fr. Tony, decided we needed a much larger and more prominent statue of St. Patrick on the grounds. There is a statue of St. Patrick above the church entrance on King Street East, but unless you looked way up, you don’t notice it. Timothy Schmalz was chosen to sculpt this statue as well and both sculptures were installed at the same time and dedicated by Bishop Crosby, October, 2015.
Fr. Tony and Fr. Jarek, long steeped in the history of the founder of the Oblates of Mary Immaculate, St. Eugene de Mazenod, decided to establish a more permanent home for their outreach initiative, and with the co-operation of the Hamilton Wentworth Catholic District School Board, opened De Mazenod Door Outreach in St. Patrick Catholic Elementary School, right next door to the church office. From two loaves of sandwiches a day to serving 350+ seven days a week, 365 days a year, De Mazenod Door Outreach has become a very important daily stop for our grateful guests.

A dump truck traveling down the Claremont access runs into the Homeless Jesus statue, knocking it completely off its support. Thankfully no one is hurt and Homeless Jesus receives only a few minor scrapes.
After seven years of discussion and debate over changes to the interior of St. Patrick Church, on October 27, 2019, following the 7:15 PM Mass, the host was moved in procession from its home in the Church to its temporary home in St. Patrick School. The Church was closed and renovations began. The walls of the church were painted, the old red carpet (installed in the early ‘70’s), was ripped up and replaced by beautiful slate tile. The Baptismal Font was moved to the centre of the church, new ceramic tile was placed under the pews, kneelers were taken off and the old covering was replaced with new material, done in assembly line fashion by parishioner volunteers. The renovation project, under the direction of Joe Kutlesa, Project Manager, took place in six weeks and we were back in the Church for the second week of Advent.